Oman is a nation in Western Asia. Its capital city Muscat. Oman for an independent foreign policy towards the countries of the Persian Gulf region. Sultan Qabus, deceased in 2020, tried to maintain good relations with all neighboring countries during his long-term power holdings. This balance has led to some irritation in the area, but the new Sultan Haitham bin Tariq has promised to stick to the neutrality. The country has at times played a mediating role in the region, not least in terms of conflicts with Iran. 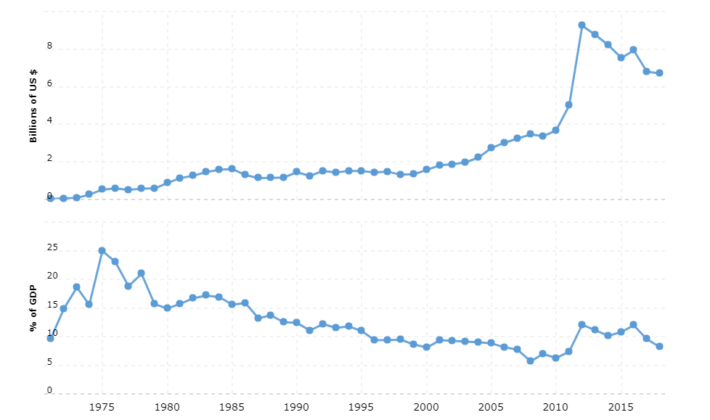 Oman has long had good relations and cooperation with both the United States and the United Kingdom. The country housed US Air Force during the 2000s that supported US military operations in Afghanistan. In 2019, a new agreement was signed to allow the United States to use ports and airports in Oman for its armed forces. In 2014, it was revealed that the UK had an intelligence base near Musqat that oversees data and telecommunications in the area. In addition, Oman has made large arms purchases from both countries.

When Iraq invaded Kuwait in 1990, Oman joined the UN-supported alliance in the subsequent war against Iraq. Following the terrorist attacks on the United States on September 11, 2001, Oman expressed support for the US war on terrorism. When the United States attacked Iraq in the spring of 2003, Oman chose to formally stand outside but reluctantly surrendered its territory for US flights. In autumn 2014, unlike many of its neighboring countries, Oman chose not to participate in the US-led attacks against the Islamic State (IS) jihadist movement in Syria.

Oman was a driving force when the GCC (Gulf Cooperation Council) regional partnership was formed in 1981; In addition to Oman, the GCC also includes Bahrain, the United Arab Emirates, Kuwait, Qatar and Saudi Arabia. Oman, which was itself hit by popular protests in 2011, stood behind when the GCC countries Saudi Arabia and the United Arab Emirates sent troops to Bahrain to assist the regime there during street protests in 2011. On the other hand, Oman refused to participate when the other GCC countries began in March 2015 air strikes against the Iran-backed Huthirbells in Yemen.

In 2011, Omani authorities revealed a spy network that was said to work for the United Arab Emirates. The neighboring country, with which Oman normally has good relations even though the common border was not finally established until 2008, denied all charges of espionage. Oman’s close relations with Iran were one of the areas believed to be of interest to the neighboring country.

Oman has a long month of good relations with Iran, with which it shares the inlet of oil traffic so important to the Persian Gulf while Iran supplies Oman with natural gas. Oman has served as a communication intermediary while being able to mediate in conflicts. Oman has succeeded in establishing prison exchanges in both directions between Iran, the United States and the United Kingdom in the 2000s and hosted negotiations on Iran’s nuclear program from 2011. Negotiations led to the international agreement in 2015 aimed at limiting Iran’s nuclear weapons capabilities.

The neighboring countries of the GCC have not always looked with open eyes on Oman’s contacts with Iran. Shiite Iran has been accused of supporting Shiite groups that have challenged Sunni Muslim regimes in Arab countries.

Even in relation to neighboring Yemen, with which Oman previously had a border conflict, Oman has tried to assume a mediator role and, among other things, contributed to the release of Europeans kidnapped by the terrorist network al-Qaeda’s local branch.

Relations with India and China have increased during the 2000s as trade and cooperation with these countries grew.

In 2018, it was noted that Oman was one of the countries that Israel approached during a diplomatic offensive to achieve better contacts with Arab states. However, countries do not have full diplomatic relations.

The military service is voluntary, but the state’s military spending is high. In 2018, they decreased compared to the previous year, but still amounted to 8.8 percent of GDP, according to the Sipri Peace Research Institute.