Kazakhstan is a nation in Central Asia. Its capital city is Astana. For Kazakhstan, relations with Russia are central, but the government also strives for good relations with neighboring countries and the western world. Contacts with China have been significantly strengthened during the 2010s; they are mainly about Chinese investment in Kazakh infrastructure. 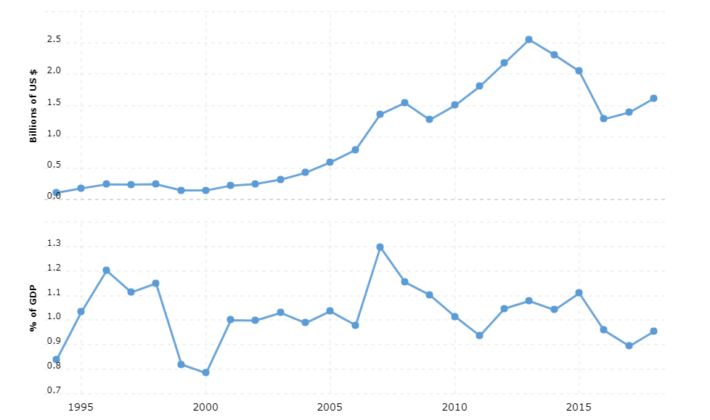 With Russia, Kazakhstan pursues extensive trade, mutual investment is numerous and security cooperation is tight. Russia rents the Bajkonur space base in central Kazakhstan and has contributed to the Kazakh communications satellite program.

Russia’s influence became particularly evident in connection with the crisis in Ukraine in 2014 (see Ukraine, current policy). The Ukrainians then had to pay a high price when they chose increased cooperation with the Western countries instead of Moscow. Kazakhstan, like Ukraine, has a long border with Russia and a large proportion of Russians in the population. Russia’s annexation of the Crimean Peninsula and the Moscow-backed aggression in eastern Ukraine raised concerns among many for a similar development in Kazakhstan. This was especially true when Russian President Vladimir Putin questioned Kazakhstan’s legitimacy in a statement that Nazarbayev created a state that had never existed as an independent entity before.

Kazakhstan has been forced to strike a balance between staying well with Moscow without unnecessarily bumping into Western countries. Kazakhstan acknowledged the referendum that formed the basis of the Russian annexation of Crimea, as well as voiced criticism of the Western countries’ sanctions on Russia. However, the country chose not to participate in the subsequent Russian import bans on some goods from EU countries.

Kazakhstan is an advocate for close cooperation between the former Soviet republics. In the early 1990s, the country sought to play an active role in the Commonwealth of Independent States (CIS), the association that former Union republics formed when the Soviet Union collapsed in 1991. But the CIS has not come to play any major function.

A smaller group of states has instead gone ahead with other cooperation plans. Together with Russia and Belarus, Kazakhstan and a couple of the Central Asian neighbors in 2000 formed the Eurasian Economic Community (Eurasec), which in 2006 merged with the regional body Central Asian Cooperation Organization (Caco). From 2010, three of Eurasec’s member states – Kazakhstan, Russia and Belarus – went on to form a Customs Union, and in May 2014, a decision was made to convert it into the Eurasian Economic Union (EEU). The new EEU was born on 1 January 2015 and Eurasec ceased to exist. Armenia already joined the following day and Kyrgyzstan in August 2015.

The idea is that the EEU countries should have a common market and extensive economic cooperation, partly with the EU as a model. Free movement of goods, services, capital and labor must be guaranteed. The EEU is intended to give full access to a market with 170 million residents and make it easier to reach the rest of the world market. However, many are worried that EEU cooperation will tie Kazakhstan even harder to Russia.

The cooperation is also extensive with the Central Asian neighbors in the south. Kazakhstan has made investments in Kyrgyzstan and assisted the country with financial assistance. Tajikistan has also been the subject of investment and aid. Relations with Uzbekistan were previously strained, partly because of ambiguities surrounding the border crossing. However, Nazarbayev’s first state visit to Uzbekistan in 2006 became the starting point for closer economic and security cooperation between the two countries. At a meeting in Semipalatinsk the same year, Kazakhstan and the four other Central Asian former Soviet republics signed an agreement for the region to be a nuclear-free zone.

In the 2000s and 2010s, cooperation with China increased, both bilaterally and within the framework of the Shanghai Cooperation Organization (SCO), which includes China, Kazakhstan, Russia, Kyrgyzstan, Tajikistan and Uzbekistan. In addition to trade and other economic cooperation, agreements have been signed in areas such as energy, security and telecommunications.

In the western Chinese province of Xinjiang, there are separatist efforts, which have caused tensions between Kazakhstan and China. In Xinjiang, some one million Kazakhs and over six million Uyghurs live – a closely related Turkish people who are also represented in Kazakhstan. Among the Uighurs in Kazakhstan, there are many who have fled the Chinese regime’s attempt to defeat the Uighur autonomy in Xinjiang.

From August 2018 came reports, including from Human Rights Watch (HRW), that up to one million Uyghurs were being held in so-called retraining camps in Xinjiang. In October of the same year, Kazakh citizens submitted a call to the German Embassy in Astana (renamed Nursultan in 2019) in which they appealed to German Chancellor Angela Merkel for help in releasing relatives in the Chinese camps. In January 2019, following popular pressure, the Kazakh government agreed with Beijing that information had come out that released Uighurs had been placed under house arrest in Xinjiang. Beijing responded by allowing 2,000 ethnic Kazakhs in China to move to Kazakhstan if they gave up their Chinese citizenship.

US and other Western energy companies are involved in the exploitation of Kazakh oil and natural gas. In the 2000s and 2010s, too, China has made major investments in the Kazakh oil industry. In 2005, an oil and gas pipeline between the two countries was completed. In connection with the 2009 financial crisis, Kazakhstan received support loans from China. China’s extensive infrastructure project BRI (Belt and Road Initiative, New Silk Road), which will link all of Asia and parts of Europe, also includes Kazakhstan.

In August 2018, the five countries that coast towards the Caspian Sea – Kazakhstan, Azerbaijan, Iran, Russia and Turkmenistan – signed an agreement regulating its legal status. The agreement was signed by the country’s leaders in the port city of Aktau, Kazakhstan. The status of the Caspian Sea has been unclear since the dissolution of the Soviet Union in 1991. The conflict has affected whether it is a lake or an inland sea. An inland sea would be subject to UN maritime law, while the right to a lake must be negotiated between the countries. The ambiguity has led to strained relations between the states as well as ambiguities about who has the right to extract the rich oil and natural gas resources.

The agreement provides that the Caspian Sea is neither a lake nor a sea, but has “special legal status”. This means that the surface water will be used jointly by the five states, while the seabed and its assets will be divided. How these boundaries are to be drawn does not say anything about the agreement. The big fishing that produces caviar is regulated by means of quotas. The agreement also states that no other country may establish military bases on the Caspian Sea alongside the five states.

From Soviet times, Kazakhstan inherited an oversized armed force with poorly maintained equipment. Since most of the officers were Russians, who moved after independence, there was a lack of qualified command. In the early 1990s, the government began cutting the armed forces to a level that the country could afford to pay for. The military service is one year.

Kazakhstan cooperates militarily with Russia and other CIS states. The cooperation includes combating international terrorism, where the threat is not least perceived to come from extreme Islamist movements in Central Asia. Within the framework of the Shanghai Cooperation Organization (SCO), China also participates in this work.

At the same time, Kazakhstan is a member of the NATO-led Partnership for Peace (PFF). Following the terrorist attacks in the United States on September 11, 2001, and the subsequent US-led war against the Taliban regime in Afghanistan that year, Kazakhstan offered its support for the US global fight against terrorism. Among other things, the US military was allowed to fly over Kazakh territory. The United States views Kazakhstan as strategically important and makes major investments in the country.

It was a great relief to Kazakhstan when in 1996 China decided to cease its nuclear weapons tests in the Xinjiang border province.

President Nursultan Nazarbayev’s power party The Fatherland (Otan) wins by a wide margin a parliamentary election which, according to both the OSCE and the Council of Europe, has serious democratic shortcomings. Other mandates mainly go to presidential parties and candidates. The only real opposition party, Ak Zjol, gets a single seat but refuses to take it in protest. Outgoing Speaker Zjarmachan Tujaqbaj, so far a member of the Fatherland, resigns in protest against election fraud.